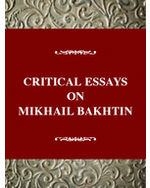 Essays represent the best-known works of this Russian philosopher and literary theorist. Includes distinctions between Bakhtin as social critic and philosopher.