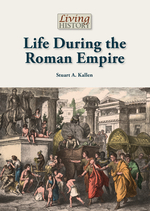 The first-century Romans not only built the Colosseum and countless temples, roads, baths, and aqueducts, they also laid the foundations for modern Western society. Life During the Roman Empire provides the peoples’ perspective of one of the most powerful and influential civilizations in history, featuring first-hand accounts of home and family, entertainments, religious practices, the work lives of citizens and slaves, and life in the Roman legion.

Front Cover.
Copyright Page.
Contents.
Foreword.
Important Events of the Roman Empire.
Introduction: A Vibrant Society.
1: Home and Family.
2: Working for a Living.
3: Life as a Legionnaire.
4: Leisure and Entertainment.
5: Worshipping the Gods and Spirits.
Source Notes.
For Further Research.
Picture Credits.
About the Author.
Index.