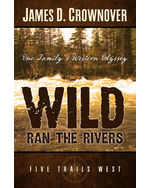 This is a story of pioneers‚ pirates and ponies‚ floods‚ earthquakes‚ a mysterious wilderness settlement and how the second generation of a Cherokee family found a home on the upper reaches of the Little Red River.

Ruth Harris‚ barely 16 years old‚ captured by river pirates‚ is sold to and forced to marry a pirate; her brother Jerry is given to the widow of one of the pirates. They are held prisoner on Pirate Island until the New Madrid earthquakes of 1811-1812 provide them a way of escape from the island.

They flee from the quakes through trackless wilderness and Jerry comes of age during their sojourn at Flee’s Settlement when he experiences his first gunfight and helps rescue an Osage family from their captors.