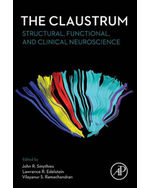 The present day is witnessing an explosion of our understanding of how the brain works at all levels, in which complexity is piled on complexity, and mechanisms of astonishing elegance are being continually discovered. This process is most developed in the major areas of the brain, such as the cortex, thalamus, and striatum. The Claustrum instead focuses on a small, remote, and, until recently, relatively unknown area of the brain. In recent years, researchers have come to believe that the claustrum is concerned with consciousness, a bold hypothesis supported by the claustrum's two-way connections with nearly every other region of the brain and its seeming involvement with multisensory integrations-the hallmark of consciousness. The claustrum, previously in a humble position at the back of the stage, might in fact be the conductor of the brain's orchestra. The Claustrum brings together leading experts on the claustrum from the varied disciplines of neuroscience, providing a state-of-the-art presentation of what is currently known about the claustrum, promising lines of current research (including epigenetics), and projections of new lines of investigation on the horizon.Develops a unifying hypothesis about the claustrum's role in consciousness, as well as the integration of sensory information and other higher brain functions.