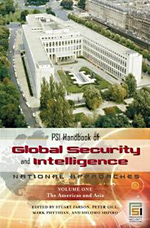 Over recent years, security and intelligence issues have been pushed to the forefront of global political debate to an unprecedented degree. Books on all aspects of intelligence have been released, but significant gaps remain. One important gap lies in the absence of an authoritative and comparative look at national approaches to security and intelligence and the resulting impact on international cooperation. Given the range of countries that need to be represented to produce an authoritative account of an issue of such global relevance and importance, a single volume would prove inadequate. This two-volume work provides chapters on national cultures of security and intelligence, which address common questions and themes. Countries have been chosen that are representative or significant to given regions, with authors covering strategic environment, regime type, accountability, impact of 9/11, international cooperation, and national cultures of intelligence.