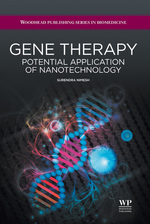 Gene therapy is emerging as a new class of therapeutics for the treatment of inherited and acquired diseases. However, poor cellular uptake and instability of DNA in the physiological milieu limits its therapeutic potential, hence a vector which can protect and efficiently transport DNA to the target cells must be developed. Nanotechnology-based non-viral vectors have been proposed as potential candidates. Various polymeric nanoparticles have been shown to be suitable, with high cellular uptake efficiencies and reduced cytotoxicity. These delivery vectors form condensed complexes with DNA which result in shielding against enzymatic degradation and enhanced cellular targeting. Advantages including easy manipulatibility, high stability, low cost and high payload, mean that nanoparticles from various polymers have been exploited. Gene therapy gives a systematic account of the many aspects of nanotechnology mediated gene therapy, from the preparation of nanoparticles to physicochemical characterization, and follows with applications in in vitro and in vivo models. This book emphasizes the various aspects of nanotechnology-based gene therapy, with initial chapters detailing the tools and techniques available for preparation and in vitro and in vivo characterization of nanoparticles. Later chapters provide exhaustive details on polymeric systems employed for gene therapy.