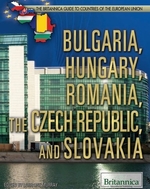 Bulgaria, Hungary, Romania, the Czech Republic, and Slovakia share a remarkably similar trajectory on their individual paths to becoming the nations they are today. Each had ties to the Roman, Byzantine, and Ottoman empires in earlier times, all became Eastern-bloc countries in the 20th century, and all successfully emerged from Communist rule in the late 20th and early 21st centuries. These multi-layered lands—where folk traditions still exist alongside the hallmarks of modern life and the remnants of communist rule—are the subjects of this sweeping tome.