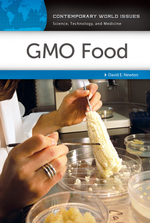 Genetic engineering has long been used to impart desirable characteristics to food plants in order to improve crop yield, pest resistance, and herbicide tolerance. Genetic modification of foods, however, has created a storm of controversy everywhere in the world-including the United States. What are the benefits of and risks involved with genetically modified organisms (GMO) and crops? What powerful industry pressures have extended the sale and use of GMO foods and crops globally? And how should consumer food products that involve GM ingredients be labeled? GMO Food: A Reference Handbook addresses these questions and the complex issues involved, allowing readers to fully understand why genetically modified organisms represent one of the most important issues in the 21st century. The book provides clear, factual information and background on the history of genetically modified crops and foods, covering topics such as the historic methods of plant and animal modification (such as cross-breeding) and important discoveries in genetics, biochemistry, molecular biology, genetic engineering, and related fields; the social, political, philosophical, and economic issues that have arisen with these scientific advances; and the laws and regulations that have resulted from the range of attitudes about GMO foods. The book also supplies additional resources for readers performing extensive research in an annotated bibliography of books, articles, reports, and web pages.