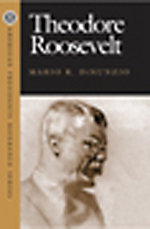 Each volume in the American Presidents Reference Series is organized around an individual presidency and gathers a host of biographical, analytical, and primary source historical material that will analyze the presidency and bring the president, his administration, and his times to life. The series focuses on key moments in U.S. political history as seen through the eyes of the most influential presidents to take the oath of office. Unique headnotes provide the context to data, tables and excerpted primary source documents.

At age forty-two Roosevelt became the youngest person to serve as president. Key policies and events during the Roosevelt administration were his antitrust efforts (culminating in the landmark 1904 Supreme Court decision Northern Securities Co. v. United States), ending the 1902 coal miners strike, acquiring the land to build the Panama Canal, introducing numerous pieces of reform legislation, and mediating the end to the Russo-Japanese War (an effort that won him the Nobel Peace Prize).

In 1908 Roosevelt endorsed the election of his friend and secretary of war, William Howard Taft, to succeed him, but by 1910 he distanced himself from Taft. In 1912 Roosevelt unsuccessfully sought the Republican Party nomination to oust Taft. The Bull Moose Party, a third party of Republican progressives, was created and nominated Roosevelt. While campaigning, Roosevelt was barely sidetracked when he was shot in the chest. Splitting the Republican Party vote, Roosevelt finished in second place to Woodrow Wilson (Taft finished in third). On January 6, 1919, Theodore Roosevelt died.