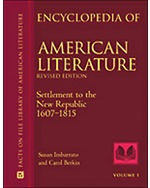 An expanded and revised edition of Encyclopedia of American Literature is an extensive reference work that spans the entire scope of American literature, from the colonial period to the present. Now in four chronological volumes, this comprehensive encyclopedia includes entries on writers, works, literary movements, and other topics that high school students and undergraduates are likely to encounter. Regionally and culturally inclusive, entries on writers describe key life events, provide thumbnail descriptions of and critical reactions to their works, and discuss the writer's significance in the literary period. A chronology in each volume puts the literature of the period in context.

Volume I: Settlement to the New Republic, 1607-1815
Explores the connections between early American history and the nation's emerging literary tradition - covering the Puritans and their Bay Psalm Book, the Federalists and the United States Constitution, Benjamin Franklin, Phillis Wheatley, and more.

Volume II: The Age of Romanticism and Realism, 1816-1895
Discusses the writers, works, genres, literary movements, and related historical events of 19th-century America, from the romanticism of Walt Whitman, Nathaniel Hawthorne, and Ralph Waldo Emerson to the realism of Mark Twain, Henry James, and William Dean Howells.

Volume IV: The Contemporary World, 1946 to the Present
Examines the emergence of new writers and voices and describes the evolving movements that encompass today's literary history - covering Deconstruction, the Beats, gay and lesbian literature, New Journalism, science fiction and fantasy, and more.