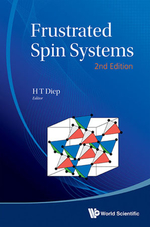 This book covers all principal aspects of currently investigated frustrated systems, from exactly solved frustrated models to real experimental frustrated systems, going through renormalization group treatment, Monte Carlo investigation of frustrated classical Ising and vector spin models, low-dimensional systems, spin ice and quantum spin glass. The reader can - within a single book - obtain a global view of the current research development in the field of frustrated systems.This new edition is updated with recent theoretical, numerical and experimental developments in the field of frustrated spin systems. The first edition of the book appeared in 2005. In this edition, more recent works until 2012 are reviewed. It contains nine chapters written by researchers who have actively contributed to the field. Many results are from recent works of the authors.The book is intended for postgraduate students as well as researchers in statistical physics, magnetism, materials science and various domains where real systems can be described with the spin language. Explicit demonstrations of formulas and full arguments leading to important results are given where it is possible to do so.