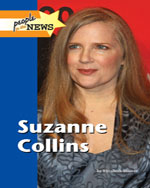 Writer Suzanne Collins was forty-six when she published The Hunger Games, a novel for young adults set in a dark future where North America has been obliterated by war and climate change. The residents of Collins's dystopia are forced to send their children to fight to the death in a sadistic game created by the government. The book wrestles with meaty themes: the effect of war, the dangers of voyeurism in popular culture, and how governments use hunger and threats of violence to control populations. This new edition in Lucent's People in the News series details Collins's life before The Hunger Games - the first eighteen years of her writing career in television, and her well-received children's book series called The Underland Chronicles - as well as the phenomenal and unexpected success of the Hunger Games series. So far 8.2 million copies of Collins's Hunger Games books have sold and, after the release of a movie in 2012, sales figures are only expected to climb.