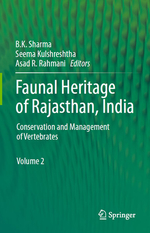 This is the first ever monumental and scientific documentation of the faunal wealth of the Indian Desert state of Rajasthan. This volume, the second of two, provides a comprehensive picture of the conservation efforts undertaken to prevent further degradation of the condition of Rajasthan's faunal wealth. A scholarly contribution to the field of knowledge, it provides novel and vital information on wildlife preservation initiatives in India's largest state. Broadly falling under the Indo-Malaya Ecozone, the three major biomes of Rajasthan include deserts and xeric shrublands, tropical and subtropical dry broadleaf forests, and tropical and subtropical moist broadleaf forests. The corresponding ecoregions to the above biomes are, respectively, the Thar Desert and northwestern thorn scrub forests, the Khathiar-Gir dry deciduous forests, and the Upper Gangetic Plains moist deciduous forests. Contrary to popular belief, the well-known Thar or Great Indian Desert occupies only a part of the state. Rajasthan is diagonally divided by the Aravalli mountain ranges into arid and semi-arid regions. The latter have a spectacular variety of highly diversified and unique yet fragile ecosystems comprising lush green fields, marshes, grasslands, rocky patches and hilly terrains, dense forests, the southern plateau, fresh water wetlands, and salt lakes. Apart from the floral richness, there is faunal abundance from fishes to mammals. In this volume, the various flagship and threatened species are described in the 20 chapters penned by top notch wildlife experts and academics. The world famous heronry, tiger reserves, wildlife sanctuaries and some threat-ridden biodiversity-rich areas shall certainly draw the attention of readers from around the world.