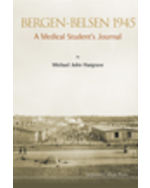 Between 1941 and 1945 as many as 70,000 inmates died at the Bergen-Belsen concentration camp in northwestern Germany. The exact number will never be known. A large number of these deaths were caused by malnutrition and disease, mainly typhus, shortly before and after liberation. It was at this time, in April of 1945, that Michael Hargrave answered a notice at the Westminster Hospital Medical School for ‘volunteers’. On the day of his departure the 21-year-old learned that he was being sent to Bergen-Belsen, liberated only two weeks before. This firsthand account, a diary written for his mother, details Michaels month-long experience at the camp. He compassionately relates the horrendous living conditions suffered by the prisoners, describing the sickness and disease he encountered and his desperate, often fruitless, struggle to save as many lives as possible. Amidst immeasurable horrors, his descriptions of the banalities of everyday life and diagrams of the camps layout take on a new poignancy, while anatomic line drawings detail the medical conditions and his efforts to treat them. Original newspaper cuttings and photographs of the camp, many previously unpublished, add a further layer of texture to the endeavors of an inexperienced medical student faced with extreme human suffering.