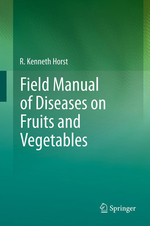 Field Manual of Diseases on Fruits and Vegetables, 1st Edition

The Fruits and Vegetables manual is a reference manual on diseases which attack fruits (including berries), vegetables, and nuts. The manual identifies various types of diseases which are known to invade these plants located throughout North, Central, and South America. The recordings include diseases caused by fungi, bacteria, viruses, viroids, phytoplasmas, and nematodes. Causal disease agents are described and illustrated in some cases and diseases and disease control measures are also discussed. A manual such as this is never finished since new reports of diseases are continuously reported.