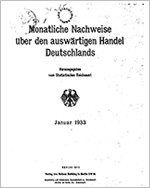 When the Nazis came to power the most pressing issue was a 30% unemployment. The economic policies of the Third Reich were in the brainchild of Hjalmar Schacht, who was president of the central bank under Hitler, and became finance minister in the following year. Schacht was one of the few to take advantage of low interest rates and government budget deficits high, with massive public works funded by large budget deficits. The consequence was a rapid decline in unemployment. This Keynesian economic policy was supplemented by the boost to demand provided by rearmament and swelling military spending.

Schacht was replaced in 1937 by Hermann Goering. Goering introduced the 4-year plan whose aim was to make Germany self-sufficient to fight a war within 4 years. Under Goering imports were slashed. Wages and prices were controlled--under penalty of being sent to a concentration camp. While the state intervention into the economy almost led to full employment during the 1930s, real wages dropped by roughly 25%. Government financing came to the investment process, which the proportion of private securities issued falling from over half in 1933-1934 to 10% in 1935-1938.

Another goal was to expand the 100,000-strong German army into a force of millions under the 4-Year Plan. The war came and although the 4-Year Plan technically expired in 1940, Hermann Goering had built up a power base that effectively controlled all German economic and production matters.

This collection is based on these economic publications: