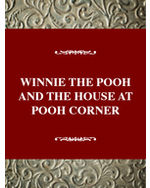 In the Forest of A. A. Milne's Winnie the Pooh novels, we never see any "Hostile Animals" as one the size of a piglet might fear, but instead we see a community of toy animals--Pooh Bear, Piglet, Rabbit, Eeyore, Owl, Kanga, Roo, and Tigger--who accompany their friend Christopher Robin on his "expeditions." Companionship, safe adventuring, and the acceptance of characters' flaws and foibles are common themes throughout both books, and the episodes tend to have a similar form in which characters meet, adventure together, and then either reconcile if need be or, more frequently, return to their homes--in Pooh's case, usually for some honey. In this affectionate and balanced analysis of two of the most popular books ever written for children, Paula T. Connolly argues that Milne's toy characters and his Christopher Robin inhabit a pretechnological, Arcadian world. Milne's Forest ensures its inhabitants' safety much like the Edwardian nursery, according to Connolly--a world, she acknowledges, of privilege and class security.