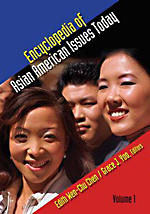 Encyclopedia of Asian American Issues Today is the first major reference work focused on the full expanse of contemporary Asian American experiences in the United States. Drawing on over two decades of research, it takes an unprecedented look at the major issues confronting the Asian American community as a whole, and the specific ethnic identities within that community — from established groups such as Chinese, Japanese, and Korean Americans to newer groups such as Cambodian and Hmong Americans.