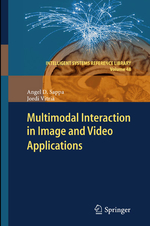 Traditional Pattern Recognition (PR) and Computer Vision (CV) technologies have mainly focused on full automation, even though full automation often proves elusive or unnatural in many applications, where the technology is expected to assist rather than replace the human agents. However, not all the problems can be automatically solved being the human interaction the only way to tackle those applications. Recently, multimodal human interaction has become an important field of increasing interest in the research community. Advanced man-machine interfaces with high cognitive capabilities are a hot research topic that aims at solving challenging problems in image and video applications. Actually, the idea of computer interactive systems was already proposed on the early stages of computer science. Nowadays, the ubiquity of image sensors together with the ever-increasing computing performance has open new and challenging opportunities for research in multimodal human interaction.This book aims to show how existing PR and CV technologies can naturally evolve using this new paradigm. The chapters of this book show different successful case studies of multimodal interactive technologies for both image and video applications. They cover a wide spectrum of applications, ranging from interactive handwriting transcriptions to human-robot interactions in real environments.