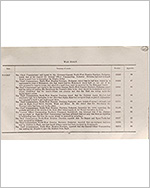 Afghanistan in 1919: The Third Anglo-Afghan War

The Third Anglo-Afghan War began on 6 May 1919 and ended with an armistice on 8 August 1919. While it was essentially a minor tactical victory for the British in so much as they were able to repel the regular Afghan forces, in many ways it was a strategic victory for the Afghans. This collection of confidential correspondence, memoranda, orders, reports and other materials provide a broad spectrum of information on military policy and administration, including the organization, operations and equipment of the army during the war. Afghanistan has been called the "graveyard of empires" due to the negative experiences there by would-be British and Russian imperialists and now that the U.S. and NATO are embroiled in an enduring counter-insurgency campaign in that country themselves, a look at the mistakes of the past can prove edifying. This collection of India Office records provides an opportunity to assess the lessons learned by the British and apply them to the current situation.