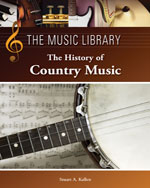 Country music is the quintessential American music, with roots in the musical traditions of the earliest settlers and having grown up as an integral part of the uniquely American experience and culture. This title in Lucent's Music Library examines the development of country music from its beginnings in the southern Appalachian Mountains in the early 20th century to the slick sounds of modern country music superstars of the early 21st century.