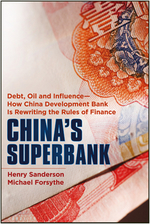 Anyone wanting a primer on China's economic success need look no further than China Development Bank (CDB). The bank, 100 percent owned by the Chinese government, holds the key to understanding China's economic development model and its flaws. The bank is at the center of China's efforts to build a world-class network of highways, railroads and power grids, pioneering a lending scheme to local governments that threatens to spawn trillions of yuan in bad loans. It doles out credit lines to Chinese solar and wind power makers, threatening to bury global competitors in cheap products. Another $45 billion has gone to the country's two biggest telecom equipment makers who are using it to win contracts around the globe. CDB has displaced the World Bank as the world's biggest development bank, lending in Africa, Asia and Latin America to further Chinese policy goals. Now it is at the forefront of another Chinese financial innovation—state-led ``private'' equity investments. Chen Yuan, who has run the bank since 1998, typifies the rise of a Chinese Communist aristocracy which is beginning to pass political power to a new generation. The son of Chen Yun, one of the founders of the People's Republic. Chen Yuan has made sure that his children get the best education. A daughter, a New York debutante, enrolled at Harvard Business School and has been romantically linked to the grandson of another party leader. This book brings the story of CDB to life by investigating the quality of its loans. It shows how the bank's China-Africa fund is displacing Western lenders in a battle for influence and investigates how the bank is introducing what could be a new form of colonialism in Venezuela, where CDB's loans buys Venezuelan oil and benefits China's biggest state-run construction companies. This story is told through anecdotes as well as facts and figures.

Front Cover.
Half Title Page.
Other Frontmatter.
Title Page.
Copyright Page.
Contents.
Preface.
Acknowledgments.
1: Let 10,000 Projects Bloom.
2: Turning a Zombie Bank into a Global Bank.
3: Nothing to Lose but Our Chains.
4: Risk versus Reward: China Development Bank in Venezuela.
5: Funding the New Economy.
6: The Future.
About the Authors.
Index.