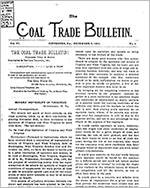 Spanning the years 1901-1918, this publication "devoted to the coal industry" provides a unique research opportunity. The coal industry was a major foundation for American industrialization. As a fuel source, coal provided a cheap and efficient source of power for steam engines, furnaces, and forges across America. As an economic pursuit, coal spurred innovations in technology, energy consumption, consumerism, and transportation. When mining companies brought increased sophistication to the organization of work in the mines, coal miners responded by organizing into trade unions. The influence of coal was so pervasive in America that by the advent of the twentieth century, it became a necessity of everyday life. This publication traces the expansion of the coal industry in the early twentieth century and brings to life the trials and tribulations of a burgeoning industry.