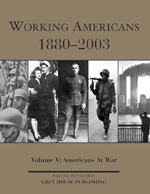 Working Americans 1880-1999 Volume V: Americans At War is divided into 11 chapters. Each covers a decade from 1880-2003 and examines the lives of Americans during the time of war, including declared conflicts, one-time military actions, protests, and preparations for war. Each decade includes several personal profiles, whether on the battlefield or on the homefront, that tell the stories of civilians, soldiers, and officers during the decade. The profiles examine: Life at Home; Life at Work; and Life in the Community. Each decade also includes an economic profile with statistical comparisons, a historical snapshot, news profiles, local news articles, and illustrations that provide a solid historical background to the decade being examined. Profiles range widely not only geographically, but also emotionally, from that of a girl whose leg was torn off in a blast during WWI, to the boredom of being stationed in the Dakotas as the Indian Wars were drawing to a close.