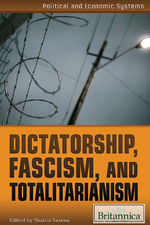 Gaining momentum in the early decades of the 20th century, a number of fascist and other authoritarian regimes could be found around the world by the 1950s. Many persist into the present day. Often led by oppressive dictators, these regimes share many characteristics, though each differ in various ways as well. This volume examines the historical trajectory of dictatorship, fascism, and totalitarianism; their characteristics; where they intersected and how they differed; and some of the individuals—including Adolf Hitler and Benito Mussolini, among many others—infamous for violently imposing their often extreme agendas.