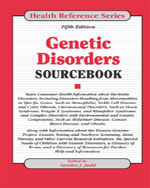 As medical researchers unlock the secrets of the human genome, they are learning that nearly all diseases have a genetic component. Some are caused by a mutation in a gene or group of genes. Such mutations can occur randomly or due to an environmental exposure. Other disorders are hereditary. These can be passed down from generation to generation within a family. Finally, many-perhaps most-genetic disorders are caused by a combination of small variations in genes operating in concert with environmental factors. GENETIC DISORDERS SOURCEBOOK, Fourth Edition offers information on how genes work, and it provides facts about the most common genetic disorders, including those that arise from mutations in specific genes, those that arise from chromosomal abnormalities, and disorders with genetic and environmental components, such as cancer, diabetes, mental illness, obesity, and addiction. Reports on current research initiatives describe the newest breakthroughs in the causes and treatments of genetic disorders, gene therapy, and pharmacogenetics. A special section offers guidance to parents of children with genetic disorders, and other chapters discuss genetic counseling, prenatal testing, newborn screening, and genetic discrimination. The book concludes with a glossary of genetic terms and a list of resources for additional help and information.