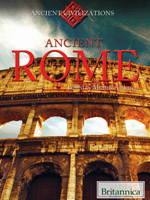 Amidst constant warfare and surges of cultural achievement, ancient Rome luxuriated in the splendors of its conquests and the glory of its Empire. Under the powerful direction of such leaders as Julius Caesar and Augustus, Rome secured its legacy as a foundation for much of the modern Western world. This provocative volume examines the many advances in governance, law, and engineering attributed to the Roman Empire as well as the individuals who shaped its military and cultural trajectory.