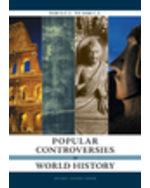 Did ancient Egyptians really use slaves to construct the pyramids? Could Charles Darwin have "borrowed" his idea of evolution from sociologist and philosopher Herbert Spencer? Was John F. Kennedy elected president only as a result of voter fraud committed by the Mafia? Researchers exploring the earliest eras of history have offered vigorous, plausible answers—both yes and no—for these and a number of other unresolved questions.

Front Cover.
Half Title Page.
Volume page.
Title Page.
Copyright Page.
Contents.
Introduction.
Contributor List.
1: Tool use is characteristic of hominids and apes, but not of other animal species..
2: Agriculture, or the domestication of plants, diffused from its start in the Middle East to the rest of the world..
3: The Great Flood referred to in the Book of Noah and in Gilgamesh resulted from the flooding of the Black Sea by an influx of higher-level water from the Mediterranean via the Dardenelles and Bosporus..
4: Much of what is now considered to be Classic culture actually has Afroasiatic roots..
5: China's head start in technological innovation was retarded by its efficient and centralized imperial government..
6: The findings of Neolithic drawings at Çatalhöyük in Turkey are a fraud. (Heated scholarly debate over the authenticity of the Neolithic interpretation.).
7: The existence of Atlantis is not entirely mythical..
8: Lemuria is not the invention of religious enthusiasts, but rather, actually existed..
9: Native American peoples came to North and South America by boat as well as by land bridge..
10: The ancient Egyptians used volunteers, not slaves, to build the pyramids..
11: Ancient Egyptian obelisks were raised by a hitherto undiscovered technology..
12: The Beta Israel (or Falasha) People of Ethiopia are one of the Lost Tribes of Israel..
13: Ancient findings of Ancient Babylonian cities confirm the Old Testament..
Volume 1 Index.