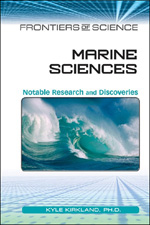 Curiosity is a powerful incentive for explorers and scientists alike. Economics and the search for profits have funded the voyages of Magellan and other navigators, and the drive to find out what lies beyond the ordinary realm has played a role in the willingness of voyagers to take such grave risks. MARINE SCIENCES details the explorers and scientists who expand the frontiers of marine science—often finding things they do not expect. This comprehensive resource includes the study of the geology of the sea floor, the chemical and physical properties of the water, and the life that teems in and around it. It also discusses a selection of various reports, offering students insightful information on the methods and applications of oceanography. Chapters include: The Ocean Depths—Exploring the Seabed, Mid-Ocean Ridge—The Largest Single Volcanic Feature on the Planet, Creatures of the Deep Sea, Tsunami—Killer Waves, El Niño and Weather, Harmful Algal Blooms—"Red Tides."