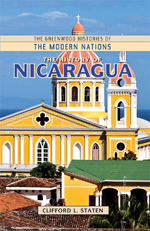 Notwithstanding Nicaraguan President Daniel Ortega's disdain for the United States, our nation has played a significant role in shaping Nicaraguan nationalism, as well as the country's political, economic, and social systems. The HISTORY OF NICARAGUA was written, in part, to help students and other interested readers understand that relationship, providing them with an up-to-date, concise, and analytical history of the Central American nation. The book begins by describing the people, geography, culture, and current political, economic, and social systems of Nicaragua. The remainder of the volume is devoted to a chronological history, emphasizing recurring themes or factors that have shaped the modern state. These include the importance of elite families such as the Somoza dynasty that ruled for more than 40 years. Other topics include the agro-export model of economic development, modern Nicaraguan nationalism, the Sandinista revolution and its legacy, and the democratic transition that began in 1990.

Front Cover.
Half Title Page.
Advisory Board.
Title Page.
Copyright Page.
Dedication.
Contents.
Series Foreword.
Acknowledgments.
Timeline of Historical Events.
Acronyms Used in this Book.
Map.
1: Nicaragua and Its People.
2: Pre-colonial, Colonial, and Early Independence (4000 BC-1856).
3: The Coffee Boom, Zelaya, and United States Intervention (1856-1925).
4: Sandino and the Rise of the Somoza Dynasty (1925-1959).
5: The Sandinistas and the Fall of the Somoza Dynasty (1959-1979).
6: The Revolutionary Years (1979-1990).
7: Defying the Odds: The Road to Democracy (1990-Present).
Notable People in the History of Nicaragua.
Nicaraguan History: A Bibliographic Essay.
Index.
Other Titles in the Greenwood Histories of the Modern Nations.
About the Author.