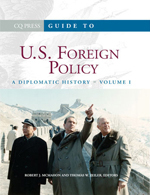 At no time in American history has an understanding of the role and the art of diplomacy in international relations been more essential than it is today. Both the history of U.S. diplomatic relations and the current U.S. foreign policy in the twenty-first century are major topics of study and interest across the nation and around the world. Spanning the entire history of American diplomacy from the First Continental Congress to the war on terrorism to the foreign policy goals of the twenty-first century. GUIDE TO U.S. FOREIGN POLICY traces not only the growth and development of diplomatic policy, but also the the shifts in public opnionthat shape diplomatic trends.