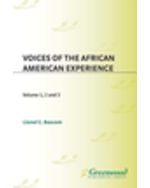 From early accounts of free blacks in the Colonies to slave narratives recorded by Works Progress Administration employees in the 1930s to a recent speech by Senator Barack Obama, this collection offers a treasure trove of carefully selected primary documents from and concerning African Americans. It is among the largest and widest-ranging collection of documents on the entire African American experience in print. Voices of the African American Experience provides access to fresh voices from history until today in more than 130 documents. Examples include: speeches, articles, mission statements, ephemera, testimony, letters, sermons, prayers, spirituals/songs, slave narratives, memoirs, essays, interviews, and more. Key official documents and important communications from noted African Americans are of course present, while making the words of ordinary African Americans from the past easily accessible to the general public. Each document is introduced and contextualized, making this set especially valuable and helpful in student research.