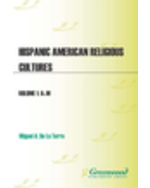 The entries of this encyclopedia cover a range of spiritual affiliations, including Christian religious expressions, world faiths, and indigenous practices. Coverage includes historical development, current practices and key individuals, while additional essays look at issues across various traditions. By examining the distinctive Hispanic interpretations of religious traditions, Hispanic American Religious Cultures explores the history of Latino and Latina Americans and the impact of living in the United States on their culture.