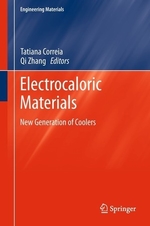 Since the 1997 Kyoto protocol of reduction of greenhouse gas emissions, the development of novel refrigerators has been a priority within the scientific community. Although magnetocaloric materials are promising candidates, they still need a large magnetic field to induce a giant ΔT as well as powerful and costly magnets. However, in electrocaloric materials (ECMs) a temperature change may be achieved by applying or removing an electric field. Since a giant electrocaloric effect on ferroelectric thin films was reported in Science in 2006, researchers have been inspired to explore such effect in different ferroelectric thin films. This book reviews electrocaloric effects observed in bulk materials as well as recent promising advances in thin films, with special emphasis on the ferroelectric, antiferroelectric and relaxor nature of ECMs. It reports a number of considerations about the future of ECMs as a means of achieving an efficient, ecologically sustainable and low cost refrigerator.