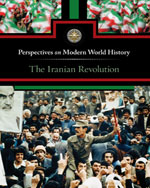 This new addition to the Perspectives on Modern World History series explores the historical and cultural events leading up to and following the Iranian uprising of 1978-1979. The text addresses issues surrounding the Iranian Revolution, such as the role of United States policy in fueling the unrest, the impact of the western press on anti-Khomeini sentiment, and parallels to the Green Revolution of 2009-2010. Personal narratives from people impacted by the Revolution, including a British diplomat eyewitness and an arrested Iranian feminist, are featured.