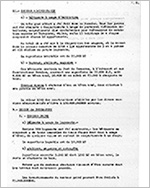 The United States decision to provide military assistance to France and the Associated States of Indochina was reached informally in February/March 1950, funded by the President on May 1, 1950, and was announced on May 8, 1950. The decision was taken in spite of the U.S. desire to avoid direct involvement in a colonial war, and in spite of a sensing that France's political-military situation in Indochina was deteriorating. This collection consists of unique records of U.S. agencies established to intervene in Vietnam—the country U.S. foreign policy deemed a lynchpin in the free world’s fight against communism. The Subject Files from the Office of the Director, U.S. Operations Missions, document the myriad concerns and rationales that went into the control and direction of U.S. economic and technical assistance programs, as well as the coordination of mutual security activities, with respect to Vietnam.