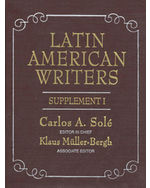 Supplement to Charles Scribner's Sons' Latin American Writers, a collection of biographical and critical essays by scholars from the U.S., Latin America, and Europe, covering chroniclers, novelists, poets, journalists, and playwrights from the sixteenth century to the present. This supplement contains 36 essays, including eight important revisions and 28 new essays on writers who have come to the fore since the publication of the the base set in 1989,including such figures as Isabel Allende, Guillermo Cabrero Infante, and Ernesto Cardenal.

"This supplement to the three-volume Latin American Writers features 28 new essays...All the subjects are 20th-century writers from Spanish- and Portuguese-speaking countries who have received significant critical attention. The essays, which average 15 pages in length, provide a brief biography and a discussion of the author's works, contextualizing both within their sociohistorical and literary frameworks. Each essay concludes with a substantial bibliography, including primary works, their English translations, and secondary works in English and Spanish or Portuguese. The contributions are well written and well informed, providing a synopsis of both positive and negative contemporary criticism and offering personal details of the authors' lives. While comparable to the Dictionary of Literary Biography's Modern Latin American Fiction Writers, this volume has a broader scope and includes writers not covered by that work. This is another fine literary reference from Gale suitable for high school and college students as well as general readers. Highly recommended for public and academic libraries." -- Library Journal (June 2002)

"A total of 36 authors are included in this supplement, along with 28 new essays and eight revised and updated articles from the base set. The articles cover the life and work of the author and place them in the proper historical, social and political context. The index includes entries from the previous three volumes, as well as this supplement. If you have the original set, you will want to add this volume to it." -- Reference Reviews on galegroup.com (April 2002)