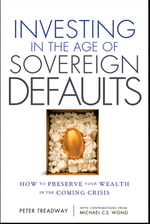 Investing in the Age of Sovereign Defaults: How to Preserve your Wealth in the Coming Crisis, 1st Edition

Over the next one to five few years, a major economic crisis involving the developed economies will involve sovereign defaults, a major redistribution of wealth and overhaul of the international financial system. This book attempts to explain the coming crisis to investors and suggest how to avoid massive losses. The book begins by reviewing the concept of government default. Legal default involves non-payment of interest and principal. There is also default by financial repression—such as invading private pensions—or by cutting entitlements. And there is Inflation default. Most advanced countries borrow in their own currencies and can print money to meet obligations. Developed countries have been building fiscal deficits that were exacerbated by the downturn of 2008 and typically have a net government debt/GDP ratio over 70%. In addition, developed countries face aging populations and burgeoning entitlements. Default—legal or otherwise—seems inevitable. This book's thesis is that the western democracies (including Japan) are too dysfunctional to make the reforms necessary to avoid default. Long term, populist tendencies predominate where there is universal suffrage and the less wealthy majority believes that the political system can advance its interests better than the market. These democracies will deal with their fiscal crises in ways that are not necessarily be optimal or rational from an economic point of view. Moreover, voters do not always make rational choices in economic matters. Only a denial of access to further government borrowing will force real action, and that will eventually happen. When the crisis is over, the dollar will not remain at the center of the system. The book concludes with advice about how to survive the crisis and where to invest to avoid catastrophic losses. Two forecasts: gold will continue to rise and government debt.

Front Cover.
Half Title Page.
Title Page.
Copyright Page.
Dedication.
Contents.
Acknowledgments.
Preface.
1: Democracies’ Fatal Attraction of Populism.
2: The Sorry Fiscal State of the Advanced Countries.
3: A Diversion to India and China.
4: The International Monetary System— in Desperate Need of Repair.
5: The Road to Worthless Paper Money.
6: An Overall Assessment of the Current Investing Scene.
7: Investment Survival in the Age of Defaults.
A Quantitative Approach to Sovereign Risk Assessment.
References.
About the Author.
About the Contributor.
Index.