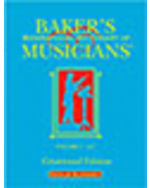 This 6-volume set provides more than 15,000 biographies of musicians in all musical genres, spanning the medieval ages to the present. Entries are written by a distinguished group of area specialists as well as the original articles of Nicolas Slonimsky. This work continues the Baker's tradition of offering the most comprehensive and authoritative information on the musicians, along with interesting and insightful evaluations of their contributions to the musical world.

"This work remains one of the core resources for music reference collections."-- ARBA

"This edition presents an enlargement, both physically and topically, of Baker's Biographical Dictionary of Musicians (8th ed. 1992. BJ203). Formerly the standard one-volume biographical dictionary for classical music, it now has been published in six volumes and has added popular music and jazz to its focus."

"A 100-year-old classic reference book, with 1,000 new classical entries and massive additions that reflect a new policy of full inclusion for jazz and popular musicians, is cause for celebration. ... The contributions of about 2,000 entries about popular and jazz musicians have vastly expanded the scope and size of the centennial edition. ... The indexes included at the end of volume 6 include a genre index, a nationality index, and an index of women composers and musicians. � The centennial edition of Baker's Biographical Dictionary of Musicians is built on the older editions but contains so many new entries and revisions and so great a change in scope that it will be a necessary addition to any library or personal collection in which a solid, basic music section is important." -- ARBA (2002)

"The decision to move beyond the traditional classical focus of Baker's represents a significant revision of the purpose and thus the content of the work...The biographies...are well-written and touch on the most noteworthy personal events, professional highlights, and critical reception...Baker's includes many names not easily found elsewhere...[and] information not found in other sources...Larger public and academic libraries that own earlier editions will definitely want to acquire this centennial edition."-- Booklist (starred review), June 1 & 15, 2001

"The most notable differences between this ninth Baker's and the previous editions is that it has been expanded to a multivolume set and also greatly increased its coverage of musical genres other than classical. Bob Dylan's bio now runs for seven columns instead of less than one, and Bach and Beethoven are just a few turns of the page away form the Bangles and the Beastie Boys. Readers will be glad to know, however, that the opinionated style with which the late Nicolas Slonimsky (now called Editor Emeritus) stamped the fifth through the eighth editions has been retained."-- Booklist (June 1 & 15, 2001)

"With its centennial edition, this reference mainstay moves beyond its traditional classical focus and includes almost 2,000 new entries on popular and jazz musicians. A must for music collections." -- Booklist (April 2002)

"Although longtime Baker's editor Nicolas Slonimsky died in 1995, his easily recognizable, sometimes tongue-in-cheek style pervades this ninth, or 'centennial' edition of his famed dictionary. Since the last edition in 1992, this most important reference source has been greatly broadened and is especially valuable for its biographical sketches of 20th-century jazz and popular musicians, written and edited by leading authors in the fields. In addition, series advisory editor Laura Kuhn has overseen the expansion of the articles on classical musicians. On of the best features of the new Baker's is its expansion from a huge, single-volume work into six volumes...This Centennial edition should prove to be a most valuable reference tool both in music and public libraries. In fact, because of its coverage of even somewhat minor figures, the new Baker's should prove to be an excellence companion to the just-released second edition of The New Grove Dictionary of Music and Musicians. Non-musicians in particular will delight in Baker's, largely because of Slonimsky's light-hearted spirit. The personalities covered here are indexed by nationality, genre, and time period in Volume 6, and the best of Slonimsky's introductions to previous editions are reprinted in Volume 1." -- Library Journal, March 1, 2001 (Starred Review)

"The centennial (ninth) edition of this venerable resource marks a changing of the guard. No longer compiled solely by Nicolas Slonimsky (who died in 1995), this edition is expanded in size and scope, reflecting trends in culture and scholarship by extending coverage beyond classical to popular and jazz music. Laura Kuhn and Dennis McIntyre edit classical content, William Porter jazz, and William Ruhlmann pop (a monumental task of selecting and editing). They bring the dictionary into the 21st century, acknowledging current research and performance trends. Slonimsky's charm and wit are still in evidence: prefaces from the fifth through eighth editions are reprinted and many of his entries are only lightly revised. Notably larger, the set adds indexes for genres, nationalities, and women composers and musicians. A more readable typeface and legible layout make entries easier to read. Bibliographies and lists of works (recordings in the case of many jazz and pop figures) are separated more distinctly from biographical information. Entries for classical ensembles (chamber ensembles, orchestras, vocal groups, instrumental duets) are still lacking. Jazz material is well done and inclusive. Pop content may cause anguish to some readers, since it represents the broadest span of subcategories and largest number of potential entries. Madonna and Gloria Estefan are included, but Britney Spears and Enrique Martin Morales (Ricky Martin) are not. Pop and rock bands are selectively represented. Personalities from rap and hip-hop are absent as are many pop stars from the sixties and seventies...Overall, this monumental work collocates information from classical, popular, and jazz music on a scale greater than any other source. Essential for all libraries." --- B. Doherty, Southwest Missouri State University CHOICE (September 2001)

"At first glance, we thought 'oh, another set of biographical sketches of dead European and American classical composers for university students.' Not so. The current set is an amazing collection of musicians, musical groups and composers of a wide range of musical styles, periods and cultures. The set celebrates 100 years of Baker's publications and revises the 1992 edition of this dictionary by adding 2,000 entries on popular, jazz, country and rock musicians as well as 20th-century classical musicians. It is a thorough update encompassing the entire decade of the 1990s. Indexes in Volume 6 include divisions by genre which includes "classical: early music, renaissance, baroque"; "classical: romantic, modern"; "jazz: early, swing, bebop, avant-garde"; and "popular: country, pop, R & B rap, rock". A nationality index ends the volume. While this is an expensive item, if your high school has an excellent music program with students who plan to study music after they graduate, you would make your music teachers and their students extremely pleased with its acquisition. Although the current pop groups just getting started are not included, users will find hundreds of their favorites and, best of all, will have reliable information."-- Gale Group Reference For Students Online Review (Blanche Woolls and David Loertscher ), May 2001

"Although this is technically a dictionary of musicians, many other individuals connected with music are included (librettists, publishers, impresarios, etc.). Introductions to this and previous editions are found in Volume I. Among other items of interest, they reveal the challenges of separating fact from fiction and lore in collecting biographical data." -- Reference & Research Book News (May 2001)

"This centennial edition aims to preserve what is best from the Slonimsky era but also has moved beyond to research areas that were not covered in previous editions. For the first time, there is a strong emphasis on genres such as popular, jazz, country, and rock musicians while, at the same time, classical entries have been preserved, updated, and expanded...Most entries from previous editions have been rewritten or revised to reflect current resources and research. The multi-volume format allows coverage of the latest generations of composers, musical scholars, performers, and conductors...A new praiseworthy feature is the addition of three indexes in the last volume by genre, nationality, and women composers and musicians. Needless to say this is a real boon to music educators and historians...It deserves to be found in library reference collections on the secondary and post secondary level. It is well worth the cost!" -- Catholic Library World (June 2001)