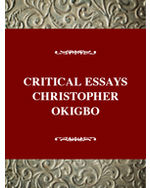 Essays cover the works of one of the best and most widely anthologized Nigerian poets, Christopher Okigbo (1930-1967), who was was killed while fighting in the war for Biafran independence from Nigeria.

"A combination of commissioned and reprinted material examines questions about critical theory and methods appropriate for decoding Okigbo's (1932-97) poetry in particular and postcolonial African poetry in general. Three interviews are followed by reviews of his collections. Then essays look at individual poem sequences; genre, method, and meaning; and the critical overview." -- Reference & Research Book News (May 2001)