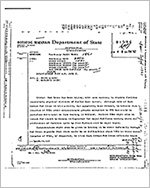 East Germany from Stalinization to the New Economic Policy, 1950-1963

The German Democratic Republic came into existence on October 7, 1949, when the German Economic Commission formed a provisional government in the Soviet zone of occupied Germany. This move occurred in response to the action taken by the United States, Britain and France, which in 1948 had agreed to unite their respective occupation zones into a West German republic. The division of Germany and the founding of an East German state signified several historical reversals.

Historically, East Germany was the Soviet Union's most pliant and loyal ally in Eastern Europe. Lack of international recognition made East Germany dependent on the Soviet Union. Until the Four Power Agreement on Berlin and the signing of the Basic Treaty by the two Germanies in the early 1970s, the noncommunist world treated the Federal Republic of Germany as the "real Germany" and East Germany as nothing more than an artificial state lacking international legitimacy. In 1954 Vyacheslav Molotov, the Soviet representative at the Four Power Foreign Ministers Conference in Berlin, proposed simultaneous elections in both Germanies leading to the creation of a unified German state. If such elections had been held, the SED would have lost power.

The presence of West Germany also made the SED regime more dependent on the Soviet Union. Before the construction of the Berlin Wall in 1961, 2.5 million East German citizens had walked across the border to live in West Germany. A common language, family ties and access to West German media left the East Germans much less isolated from West European culture than were their counterparts in Eastern Europe.

This publication reproduces the State Department Decimal Files 762B, 862B and 962B from the General Records of the Department of State in the custody of the National Archives.