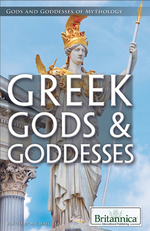 Giving Western literature and art many of its most enduring themes and archetypes, Greek mythology and the gods and goddesses at its core are a fundamental part of the popular imagination. At the heart of Greek mythology are exciting stories of drama, action, and adventure featuring gods and goddesses, who, while physically superior to humans, share many of their weaknesses. Readers will be introduced to the many figures once believed to populate Mount Olympus as well as related concepts and facts about the Greek mythological tradition.