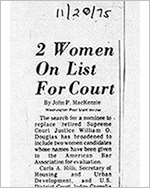 Women's Issues and Their Advocacy Within the White House, 1974-1977

In February of 1973, Presidential Counselor Anne Armstrong created a small office in the Nixon White House and brought it into the Ford administration. The office provided liaison between the President and women as a special interest group, encouraged recruitment of women for top-level government positions and initiated and assisted in the development of programs, policies, legislation and regulations supporting women's civil rights. The Lindh/Holm collection contains material from Armstrong, Lindh, Holm and Keesling from throughout the administration. Although the leadership changed, the purpose and substance of the office remained the same with only minor differences in style.

One series is devoted entirely to the planning of White House meetings, some of which were attended by President or Mrs. Ford, in which women leaders exchanged views with administration officials. The files also contain material related to OWP outreach activities, including attendance at conventions, speeches and solicitation of organization background and printed materials. Additionally, the Office's role in overseeing national activities for International Women's Year provided interesting material related to its origin in 1972, and Armstrong's and Lindh's efforts in securing an executive order and agency funding for a National Commission to Observe International Women's Year.

This collection consists of: