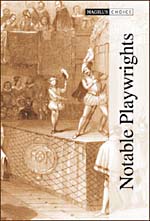 Notable Playwrights contains biographical sketches and critical studies of 106 of the most important and best-known dramatists from antiquity to the present day. In selecting articles for Notable Playwrights, the editors have taken special care to include the dramatists whose plays are most often studied in high school and undergraduate literature and drama courses. Each essay provides essential information at its beginning: the playwright's birth and death dates, followed by these sections: "Principal Drama," "Other Literary Forms," "Achievements." "Biography," "Analysis." "Other Major Works," and "Bibliography." Five useful reference features are included at the end of volume 3: a Glossary of drama terms, a Time Line of the playwrights by their birthdates, a Category List of the playwrights by the movements they represent, a Geographical List of the playwrights by countries and regions, and a general Subject Index.