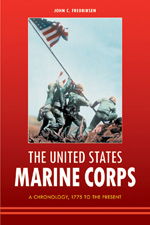 THE UNITED STATES MARINE CORPS: A CHRONOLOGY, 1775 TO THE PRESENT touches upon all aspects of the Continental and U.S. Marine Corps since their inception. All major battles in all major wars are covered, along with innumerable smaller clashes and deployments abroad. The evolution of amphibious doctrine, so essential to Marine Corps activity in the 20th and 21st centuries, is likewise covered in detail, along with the rise of Marine Corps aviation. Through a diary of daily occurrences proffered in the context of greater historical events, this chronology captures the entire sweep of U.S. Marine Corps history. It follows the Corps from the American Revolution to the halls of Montezuma and the shores of Tripoli, through World Wars I and II, and up to Operation IRAQI FREEDOM and Operation ENDURING FREEDOM in Afghanistan. Entries delineate battlefield events, but also significant political and administrative changes that have affected the Marines. Notable events in the careers of generals and other individuals are included as well.