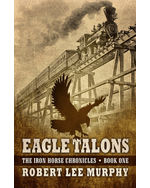 Will Braddock doesn’t want to be forced into an unwanted blacksmith apprenticeship. The newly orphaned fourteen-year-old embarks upon a quest to determine his own destiny. He heads west to seek work on the first transcontinental railroad.

Will learns to rely upon himself to achieve his goal. He constantly battles a young Irish thug who is determined to kill him. A mixed-blood Cheyenne youth‚ whom he saves from quicksand‚ gives Will two eagle talons from his amulet in thanks. The talons save Will’s life‚ and though not magical‚ he’s convinced they are lucky.

When a feisty young lady he has befriended is kidnapped by the Indians‚ and the Army refuses to send troops‚ Will decides to risk his own future to free her from captivity.