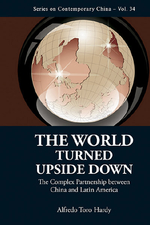 The World Turned Upside Down: The Complex Partnership Between China And Latin America, 1st Edition

Acting as a Sorcerers Apprentice, the West incorporated 1.3 billion Chinese and 1.2 billion Indians into the worlds labour equation within a context of lower production costs. This resulted in erosion of its competitive capacity and social stability, while greatly benefiting developing economies, many of which were able to emerge with unprecedented speed. With China as the main engine, the developing economies have become increasingly integrated, sustaining in the process a fundamental part of the global trade growth. While this phenomenon took shape, excesses within Western economies generated a seismic crisis that dramatically accelerated a slow decline. As the ascendant and descendant curves of developing and developed economies are crossing each other, a decoupling tendency between both has become evident. The economic partnership between China and Latin America epitomizes well the growing integration between emerging economies. Even if mostly benefiting from it, Latin America is under the double sign of threat and opportunity due to this complex relation. For Latin America to succeed, it will need to reinvent itself.The analyses and information contained in this book will be of interest to researchers, academics and policy-makers alike.