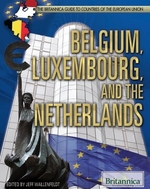 Despite being known as the Low Countries, Belgium, Luxembourg, and the Netherlands are far from insignificant. The Benelux Economic Union, which sought economic integration between the three countries, in fact served as the model for the European Union. Additionally, each of the three boasts rich histories, and what they lack in size or population, they make up for in thriving cultural climates. This absorbing volume pays each country its due, surveying the lands, societies, traditions, and histories that have elevated the Low Countries on the world stage.

Front Cover.
Half Title Page.
Title Page.
Copyright Page.
Contents.
Introduction.
1: Prehistory of the Low Countries.
2: Ancient and Early Medieval Times.
3: The Development of the Territorial Principalities and the Rise of the Towns (925–c. 1350).
4: Consolidation of Territorial States (1384–1567).
5: The Revolt and the Formation of the Republic (1567–79).
6: Belgium.
7: The Belgian Economy.
8: Belgian Government and Society.
9: Belgian Cultural Life.
10: Belgium: Past and Present.
11: Luxembourg: The Land and Its People.
12: The Luxembourgian Economy.
13: Luxembourgian Government and Society.
14: Luxembourgian Cultural Life.
15: Luxembourg: Past and Present.
16: The Netherlands: The Land and Its People.
17: The Dutch Economy.
18: Dutch Government and Society.
19: Dutch Cultural Life.
20: The Netherlands: Past and Present.
Conclusion.
Glossary.
Bibliography.
Index.