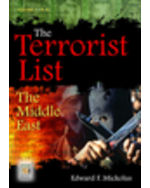 Spanning from 1950 to 2008, The Terrorist List: The Middle East alphabetically compiles key names, affiliates and masterminds behind major or minor terrorist acts or attempts in the Middle Eastern region. Whether playing a role as a leader, conspirator, defendent, financier, detainee, or person of interest, this easy-to-use set covers the vital names associated with terrorism, providing a robust compilation on international terrorism.

Connecting the dots on key individuals involved in international terrorism is harder than pundits and armchair anaylysts would have you believe. The Terrorist List gives the reader a public domain sample of the colossal amount of information terrorism analysts must sift through each day in their efforts to stop the next attack. Drawing upon 35 years of research, The Terrorist List provides information on terrorists mentioned in Mickolus's earlier chronologies, plus materials culled from al-Qaeda in Iraq personnel files.