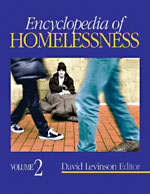 The print version originally published in 2004 received the following awards:

At any given moment, about 3 million American women, men, and children are homeless. And another 5 million Americans spend over 50 percent of their incomes on housing, meaning that one missed paycheck, one health crisis, or one unpaid utility bill can push them out the door into homelessness.

Homelessness is one of the major social problems and personal and family tragedies of the contemporary world. No community, city, or nation is immune and the lack of affordable housing and a decline in secure, well-paying jobs means that the problem will only get worse.

The Encyclopedia of Homelessness is the first systematic effort to organize and summarize what we know about this complex topic that impacts not only the homeless but all of society. The Encyclopedia focuses on the current situation in the United States with a comparative sampling of homelessness around the world.